“The infrastructure deal means funding for megaprojects like (Metro’s) Sepulveda Transit Corridor, which will revolutionize the way Angelenos get around. With more investment in (Metro’s) bus lanes and the (Los Angeles Department of Transportation’s) NextGen Bus Plan network, we can speed up our transit system and reduce congestion,” Garcetti said on Twitter after the bill’s signing.

“This once in a generation deal will transform our nation’s infrastructure and L.A. for the better,” Garcetti said. 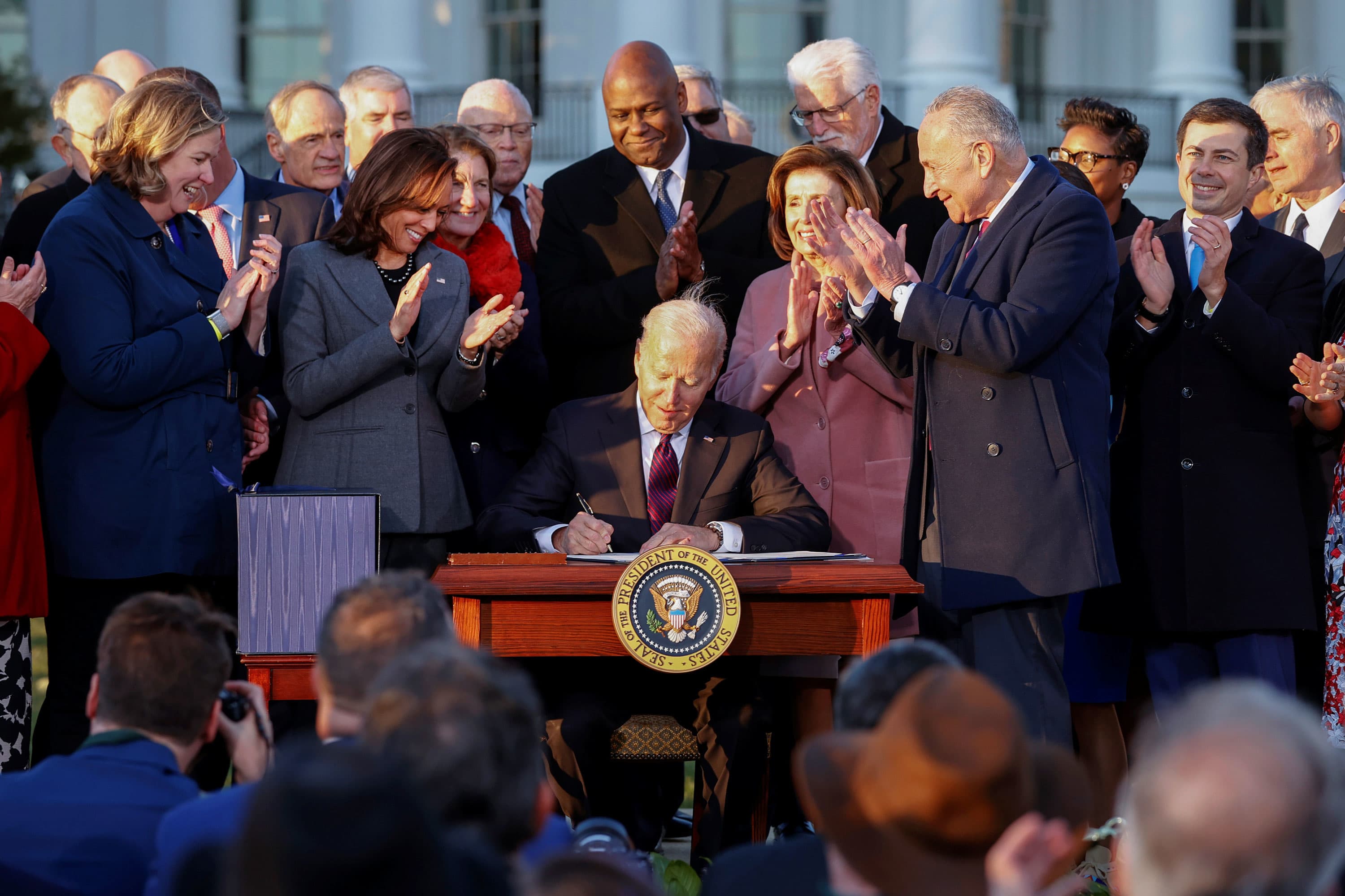 “I think we all agree that it will modernize America’s infrastructure, and in particular, our transit infrastructure,” Wiggins said in a Telephone Town Hall with Rep. Karen Bass, D-Los Angeles, last week.

Wiggins said the bill will impact Los Angeles by doubling the size of the capital investment grant program to $4.6 billion, allowing the transit agency to expand its system to better serve the 10 million L.A. County residents. Wiggins noted a study that found that a vehicle gives residents access to 17 times more destinations than the transit system.

“So we’ve got to build out a rail network, this infrastructure bill will actually help us do that,” Wiggins said. She added that the bill will also improve the city’s bus network and facilities.

“What does that mean for L.A.? Well over 80% of our riders ride the bus. The buses are the backbone of our congestion relief effort,” Wiggins said.

“This infrastructure bill will help L.A. purchase zero-emission buses, it will help us establish the electrical infrastructure to operate these new vehicles. It also includes federal funding to expand programs that ensure that the air we breathe is clean for our communities.”

Wiggins also praised the bill for authorizing agencies to implement local hiring preference for projects funded by the grant. Federal procurement regulations previously didn’t allow agencies, like Metro, to require bidders to establish local hiring programs. A Local Hire Pilot Program was implemented in 2015 by the U.S. Department of Transportation, but ended in August 2017. The Biden Administration previously moved to restore the program.

“As our economy recovers from this crushing pandemic, we need to ensure that we are coming back better than before and stronger than before.

We’re bringing thousands of well-paying jobs to Los Angeles and putting tax dollars back into the communities that paid for the projects in the first place.”

Port of Los Angeles Deputy Executive Director of Stakeholder Engagement David Libatique also said during Bass’ Telephone Town Hall that the infrastructure bill would be a game changer for the port, with $17 billion reserved for ports in the U.S. Amid an historic cargo surge that has created supply chain disruptions and a backlog at the San Pedro Port complex, Libatique said the port would use the funding for water and landside infrastructure to better prepare for surges in the future.

“So we see a terrific opportunity with over $2 billion over five years being dedicated to the port infrastructure development program. Where we see that going here in the L.A. Trade Corridor, is going to projects that are going to support and alleviate the congestion we see. We have in mind, for example, an 80-acre site on the port property within Terminal Island that will act as a support facility to accept (empty containers.)”

The facility would reduce the number of empty containers that are sitting in neighborhoods around the port.

“Long term, we think this infrastructure funding is a huge game changer because it’s going to give us the ability to invest in facilities that will allow our system to flex as we experience cargo surges like the historic cargo surge we’re currently experiencing.”

Gov. Gavin Newsom praised the bill after it passed Congress on Nov. 6 as an “historic infrastructure package (that) stands to accelerate investments in our clean transportation infrastructure, help mitigate some of the worst impacts of climate change and accelerate new projects that will create thousands of jobs.”

The state is expected to receive:

“The enactment of the bipartisan Infrastructure Investment and Jobs Act will deliver long overdue, historic investments to rebuild America’s infrastructure and public transit, while creating millions of good-paying, union jobs,” Padilla said. “I’m particularly excited that this legislation includes some of the first bills I introduced as a United States Senator and will improve the lives of Californians by shoring up our limited water resources, electrifying school buses, improving the resilience of our electrical grid, and delivering critical investments for Tribal communities.”