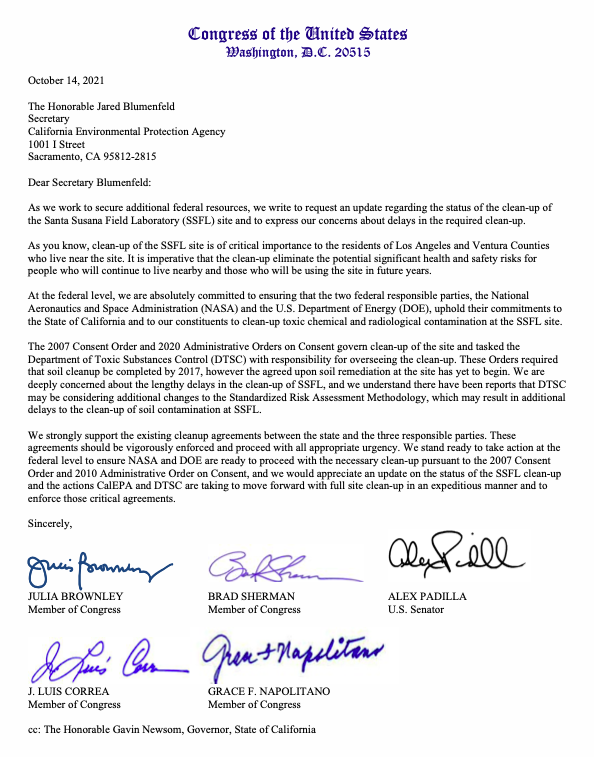 High levels of radioactive particles landed in neighborhoods from Thousand Oaks to Simi Valley–during the massive 2018 Woolsey fire which started at the contaminated Santa Susana Field Lab — according to a peer-reviewed study just published by a team of scientists known for studying environmental disasters.

What’s stunning about the findings is that they run contrary to what California’s Department of Toxic Substances Control (DTSC) said to calm public fears in the hours after the Woolsey Fire, “We do not believe the fire has caused any releases of hazardous materials… associated with contamination at the [SSFL] site.”

“The DTSC lied. They said that contamination from hadn’t migrated away from Santa Susana and the study proves that it has,” said Jeni Knack, part of a group of volunteers who helped collect samples analyzed in the study.

Knack participated in the sample collection because she had a background doing data collection on archaeological sites, and because she’s the mom of a 6-year old who lives in Simi Valley, just five miles from Santa Susana.

“I was afraid that radioactive and chemical contamination were being carried by wind and smoke during the fire,” Knack told NBC4.

It was back in 2015, that the NBC4 I-Team — in an ongoing series titled “LA’s Nuclear Secret” — revealed how the ground and vegetation at the Santa Susana Field Lab were highly contaminated with toxic radioactive and chemical waste from years of nuclear accidents and rocket tests. And the I-Team found federally-funded studies that showed that contamination could migrate to neighboring communities in wind and rain.

So after the Woolsey Fire in November 2018, a team of world-renowned scientists wanted to find out if radioactive ash and dust from the fire at SSLF had migrated off the site. The team was lead by Dr. Marco Kaltofen, who has studied fallout from nuclear accidents such as one the in Fukushima, Japan in 2011.

Kaltofen trained a group of volunteers to collect samples of ash, dust, and soil from neighborhoods and publicly accessible lands in the “fire zone,” an area up to about 10 miles from SSFL.

“The data left very little doubt. Radioactive contamination from SSFL was spread into some of the outlying communities during the fire,” Dr. Kaltofen told the I-Team.

The “hottest sample” was found nine miles from SSFL in Thousand Oaks, at 19 times above normal or “background” levels of radiation.

“People can breathe these in and take the contamination into their bodies where it could continue to affect them for months and even years,” Kaltofen said.

For years, doctors have told the NBC4 I-Team they are concerned about the health effects of radioactive waste from SSFL migrating into neighboring communities.

“If the wind is blowing and carrying radiation from Santa Susana, it doesn’t stop because there’s a fence… There’s absolutely a link between radiation and cancer,” said Dr. Robert Dodge, board member of the Nobel Peace Prize winning non-profit Physicians for Social Responsibility.

Back in 2015, the then-head of California’s DTSC told the I-Team that contamination at the field lab would be cleaned up by 2017. But six years later, most of the contamination remains, according to government documents.

Just today, four California congressmembers and one U.S. senator sent a letter to the head of California’s EPA , Jared Blumenthal, saying “We are deeply concerned about the lengthy delays in the clean up of SSFL.”

At the same time, 11 high-level local elected officials also sent a letter to CalEPA’s Blumenthal saying they’re concerned about “confidential negotiations between DSTC and Boeing that could delay or weaken cleanup [of SSFL] by Boeing.” Boeing is the current owner of most of the field lab.

The I-Team asked Boeing to talk to us for this story. Instead the company sent a statement saying “Cleanup at Santa Susana will continue to follow California law… The transformation of Boeing’s land at Santa Susana from a field laboratory to open space is well underway.”

The DTSC also wouldn’t talk to us, but sent a statement saying “CalEPA and DTSC have also been participating in non-binding mediation with Boeing … to hold Boeing accountable to its 2007 … cleanup obligations.”

Neither DTSC or Boeing would comment on Dr. Kaltofen’s peer-reviewed study just published.

Kaltofen says his big concern right now is that another wildfire could burn through Santa Susana, before much of the contamination is cleaned up.

“We could see that the more contaminated parts of the laboratory might be burned during the next fire,” Kaltofen told the I-Team. “If this is what we’ve seen when the lesser radioactive places burn, I don’t want to be there if the more radioactive places go up.”

“Boeing and the State of California have agreed to pursue mediation as a tool to attempt to accelerate resolution of a pending dispute and commencement of site cleanup. Cleanup at Santa Susana will continue to follow California law and the 2007 consent order – which includes all required public notice and comment opportunities. The transformation of Boeing’s land at Santa Susana from a field laboratory to open space is well underway. Native plants and animals are reclaiming many of the previously developed areas of the property and the community is protected through the investigation, cleanup and monitoring activities.”

As for the study, on background: The state of California did an extensive report as you mentioned, so we don’t have a position on that study. I am sure you are already doing so, but I might suggest you ask the state for their response. However, as you noted, the DTSC’s final report on the Woolsey Fire stated that, “Data from multiple lines of evidence did not identify a release of contaminants from SSFL. Like the interim report, this final report also finds the risk from exposure to smoke during the Woolsey Fire was not higher than what is normally associated with wildfire.”

CalEPA and DTSC are proud of the swift progress that has been made at the SSFL site under this new Administration. Since 2020, the last of the 18 remaining DOE-owned buildings have been demolished and disposed of at a licensed facility out of state. The final environmental impact report will be released next year, at which point DTSC will move quickly to implement the last phase of cleanup at the site. We appreciate DOE’s cooperation with the state of California, as well as ongoing support from the state’s federal delegation, who have directed DOE and NASA to expeditiously comply with DTSC’s orders to continue this work. We look forward to working in partnership with them toward its completion. CalEPA and DTSC have also been participating in non-binding mediation with Boeing and the Los Angeles Regional Water Quality Control Board to hold Boeing accountable to its 2007 order and its cleanup obligations.

Having just been made aware of the independent study regarding SSFL and Woolsey Fire, we cannot comment on its contents at this time. However, DTSC released a final report in December 2020, which confirmed that data from multiple lines of evidence did not identify a release of contaminants from SSFL.